translation investigates iterative, procedural 'movement' from one language to another. 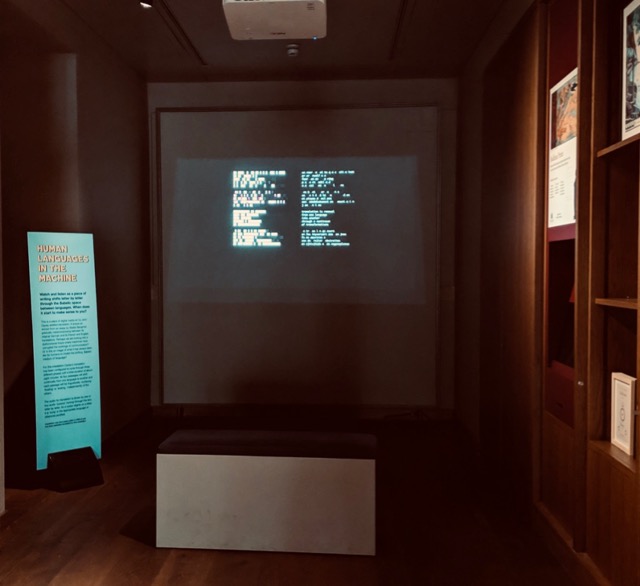 In early 2019, translation was, at last, reengineered for the web, prompted by its curation into a marvelous exhibition that was put together by Matthew Reynolds for the Bodleian Library in Oxford, UK. 'Babel: Adventures in Translation' displays treasures from the collection and related work concerned with practices and theories of translation.
The same basic version of translation as the one in the exhibition can be experienced by anyone suitably equipped online, and there is a development version here.
Matthew Reynolds has also edited an excellent volume of essays on Prismatic Translation, forthcoming before end of 2019 from Legenda, Cambridge, UK. A new essay by myself is included as, '[Mirroring] events at the sense horizon: translation over time.'

The series of pieces I now call translation developed from the earlier overboard. All these pieces are, in one sense, examples of literal art in digital media that demonstrate an 'ambient' time-based poetics. The earlier brief description of overboard on this site gives some explanation of ambience, and there is also a more detailed, related exposition of overboard's inner workings in dichtung-digital.

While running the same algorithms as 'overboard', passages within translation may be in one of three states - surfacing, floating or sinking. But they may also be in one of three language states, German, French or English. If a passage drowns in one language it may surface in another.

The main source text for translation is extracted from Walter Benjamin's early essay, 'On Language as Such and on the Language of Man.'[NOTE] Other texts from Marcel Proust's The Way by Swann's may also, less frequently, surface in the original French, and im one or other of its standard German and English translations.

The generative music for the translation pieces was developed in collaboration with Giles Perring who did the composition, sound design, and, in the first versions of translation, performed and recorded the sung alphabets. In current versions, the base alphabets are sung by Melanie Pappenheim, produced by Giles.

For the web-accessible Javascript version, no special preparation or installation should be required.

For the earlier QuickTime versions (which can still be made to run), because Apple no longer supports programmable QuickTime, you must install QuickTime Player, version 7, or (for those willing to undertake the configuration) reinstate the QuickTime browser plugin (only for some browsers).

IMPORTANT. To hear the generative musical soundscape designed for the pieces by Giles Perring, you must first download and install a total of four 'sound font' files, following these instructions. If you have already installed the sound fonts for 'overboard' you only need the two new 'translation' sound fonts, 'dfe1.sf2' and 'grins.sf2'.

NB: 'BordoFixed' truetype font retired. I've abandoned this font and reverted to Monaco (likely to be preinstalled on most Mac systems) for Mac playback, because access to this font seems to be intermittently broken by OS 10.6 Snow Leopard, which also threatens to make certain other features of QuickTime projects difficult of access (Midi, in particular). See this Apple Support article.

how to read translation

There are, currently, four published versions of translation, the most developed version of which is translation5. For each version below, two links are given. One – click the icon – downloads the archive of a .mov file. Run these locally using QuickTime Player 7. The other links are deprecated. If you have a working QuickTime plugin installed, you will be able to open the works in a separate tab or window, using certain browsers. PLEASE NOTE AGAIN: that to have the intended audio experience of the piece, you should have downloaded and installed the sound fonts as described above.

The translation pieces are intended, primarily, simply to run in ever-shifting patterns of language. However, you can hold down key combinations to produce a limited range of effects, as follows (you will need to hold the keys down for 3-5 seconds before the effect begins):

shift-s: restart the quasi-randomization of verse states (resume normal ambience of the piece)