a maquette for the paper Lens: the practice and poetics of writing in immersive VR, published by the Leonardo Electronic Alamanac. This piece is also used as an illustration for the paper I presented at the 6th DAC (Digital Arts & Culture) conference, held at the IT University in Copenhagen, 1-3 December, 2005. The latter paper - now also online at dictung-digital - is titled Writing on complex surfaces.

lens began as a study piece relating to work-in-progress for the four-wall VR Cave at Brown University. It demonstrates how literal materiality - the surfaces of letters composing the texts of lens itself - can, in a simple illusory 3D space, subvert our familiar experiences and assumptions concerning surfaces of inscription. For example, by making a letter large enough within the programmatic structures of lens, the region of colour defining the letter-shape becomes an entirely different type of surface - it becomes a surface of inscription for other texts that had been perceived 'underlying' it. In doing so, literal surfaces subvert our experience of space and relative distance. Surfaces that were 'in front' now form surfaces for other texts. They may even become other 'spaces' within which writing drifts. Letters both delineate and redefine spatial relationships.

No great claims are made for the aesthetic or literary value of lens in its present form. It is technically simple and has technical constraints. In the QuickTime version, there is no attempt to render a genuine illusion of 3D space (no 3D graphics are employed). 'Distance' is rendered by scale alone, and scaling of fonts (via sprites) in QuickTime still leaves much to be desired.

In late 2007, a further 'proof of concept' version of lens was made for the immersive 3D stereo Cave Writing, now Writing3D, framework at Brown University. In June 2012, during a protracted period of transition during which a new Cave was being developed and constructed ... 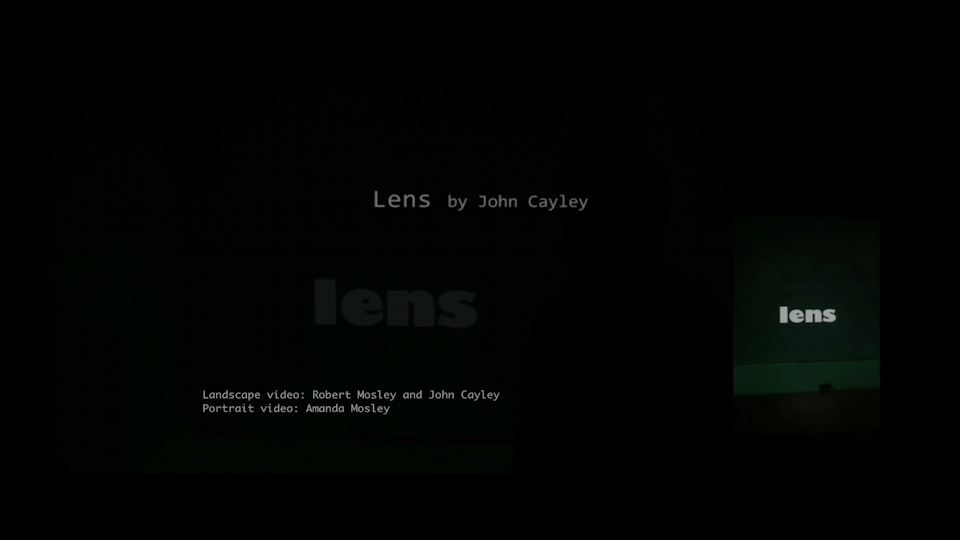 The video documentation of this maquette was made by
John Cayley, Robert & Amanda Mosley,
composited and edited by Luciana Gatass.

Because Apple no longer supports programmable QuickTime the only feasible way to run this version of lens is to download and install QuickTime Player, version 7 from Apple, then download the .mov file for the maquette and run it locally on your computer, or in QT Player 7: File → Open URL... and type in: "http://programmatology.shadoof.net/works/lens/lens.mov"


how to read lens

Four short texts, two in dark- and two in light-coloured letters drift against the background of lens. Two light and dark versions of the word 'lens' are also present. At any one time, one of these 'lens' words can be scaled by the reader: the Shift-key makes a 'lens' larger; and the Ctrl-key (Alt on XP machines) makes it smaller. These 'lens' words can also be clicked and dragged. Scale and move the 'lens'; make it as large as you can and see what happens.

The following link allows you to download a closely related, but non-'interactive' piece, made in Quartz Composer. It is supplied without warranty and will only run on Macintosh machines up to OS X version 10.14 Mojave with a working version of QuickTime Player 7 installed.

From within QT Player 7 you may also: File → Open URL... and type in: "http://programmatology.shadoof.net/works/lens/threshold.qtz". For other Quartz Compositions, see under sidebar item 'Sketches'.