overboard is an example of language art in digital media that demonstrates an 'ambient' time-based poetics. There is a stable text underlying its continuously changing display and this text may occasionally rise to the surface of conventional readability in its entirety. However, overboard might best be installed as a dynamic, wall-mounted linguistic image, a restless painting in language. As time passes, the text drifts continually in and out of readability - sinking, rising, and sometimes 'going under' or drowning, then rising to the surface once again. When floating it runs a program of simple but carefully designed algorithms which allow letters to be replaced by alternate letters that are in some way similar to those of the original text. When sinking, letters may simply vanish. When surfacing or floating however, word shapes are largely preserved. In fact, except when sinking, the text is always readable for anyone who is prepared to take time and recover the principles of alternate letter replacement. A willing reader is able to preserve or 'save' their reading of the text.

Giles Perring developed generative music for the piece that reflects and responds to these procedures.

An installation version of overboard was shown at the p0es1s exhibition and colloquium in Berlin during February and March 2004. The version from this date was made in programmable QuickTime and it is still possible to experience the QuickTime version as set out below. As of June 2018, the piece has been refactured as a javascript web app. Please follow the link associated with this image: 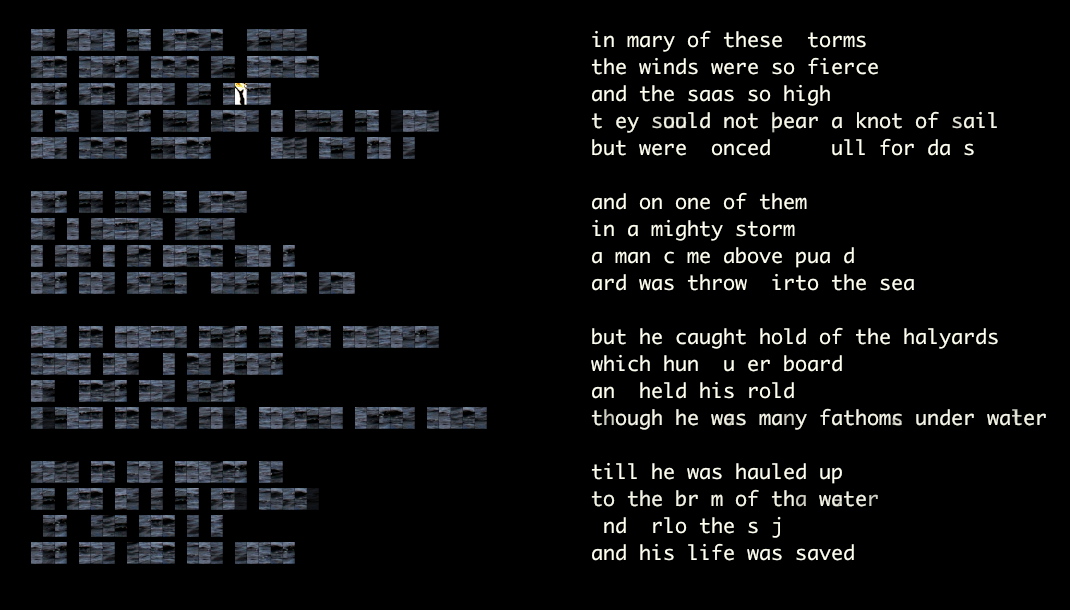 A brief article describing the inner workings of overboard was published by dictung-digital - 'overboard: An Example of Ambient Time-Based Poetics in Digital Art.' dictung-digital 32 (2004) http://www.dichtung-digital.org/2004/2-Cayley.htm.

requirements for running the deprecated QuickTime version of overboard

Because Apple no longer supports programmable QuickTime, the various QT versions of overboard require the installation of QuickTime Player, version 7, or (for those willing to undertake the configuration) reinstating the QuickTime browser plugin (which will only work with certain browsers).

To hear the generative musical soundscape designed by Giles Perring for the QuickTime verson, you must first download and install two 'sound font' files, following these instructions.

- download the archive containing the files from this page site: http://programmatology.shadoof.net/?downloads.

overboard was developed on the Macintosh and the text (in particular) looks better on this platform. As of Spring 2018, the only reliable way to experience the QuickTime version overboard is to open the movies directly from your local installation of QuickTime Player 7 (File → Open URL...) using the following URLs:
http://programmatology.shadoof.net/works/overboard/overboardQT/overboard.mov
http://programmatology.shadoof.net/works/overboard/overboardQT/overboardDE.mov

You can, in fact, view the piece without the sound fonts installed, but the midi sounds will all default to a QuickTime piano.