a collaboration with Penny Florence

Since late 2010, I have been working — intermittently — with Penny Florence on programmatological systems for practice-based research into what we now call 'inextrinsic reading.' For my own work, this has involved the design of algorithmically driven readers which have been developed, broadly, within the framework of The Readers Project. 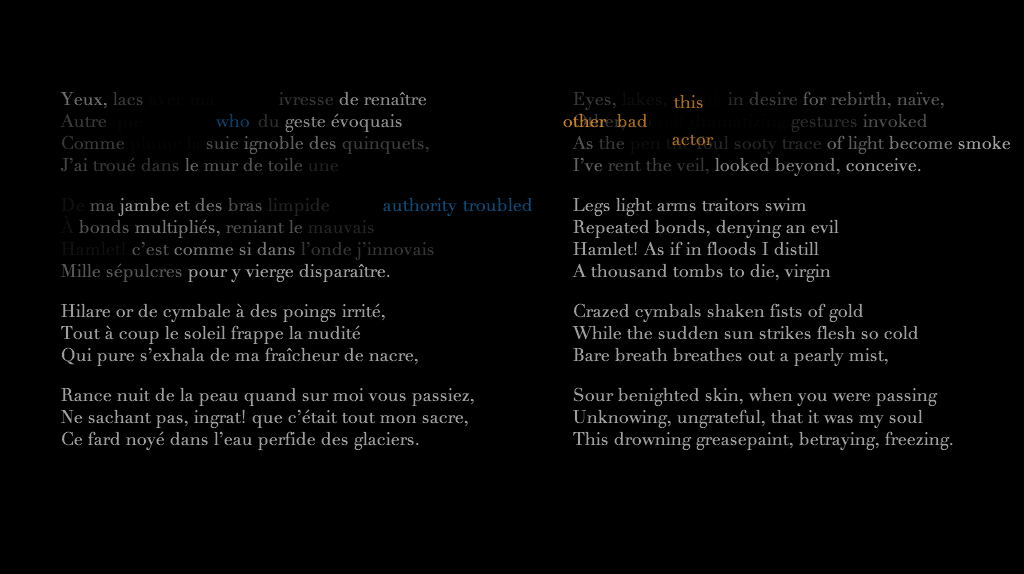 The Inextrinsic Reader is our currently agreed name for one of these readers that has been scripted so as to generate and display substitutions for the words of the text it is reading in human time and, in practice, while an actual human reader watches, reads and, potentially, intervenes in its reading.

In terms of what is displayed, visually, an Inextrinsic Reader opens a space in the text centered on the word it is reading and partially fills this space with other text that has been composed by whoever (or whatever) has scripted its substitutions. For the moment, these readers deal with successive words but in the future they will be developed to allow substitutions for other, initially larger, linguistic structures. 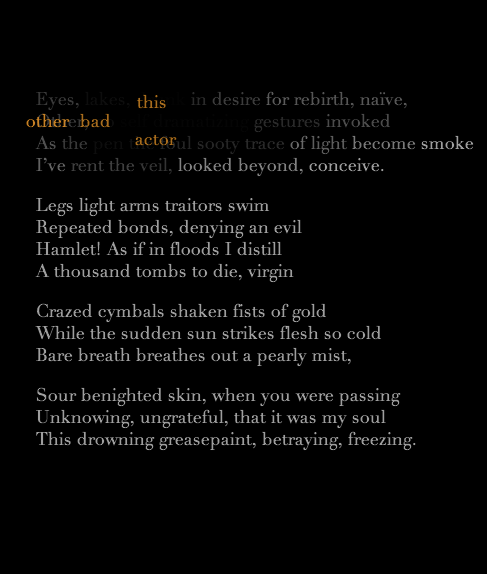 Having already undertaken important research into Mallarmé's poetics, Penny Florence introduced an art-practice dimension in the form of animated, digital literary versions of Un coup de dés jamais n’abolira le hasard using Director, and culminating in publication on CD-ROM. By 2010, she was developing a more general interest in digital poetics. She was looking to ePoetry (as it is also sometimes called) for a way to re-present certain aspects of Mallarmé's poetic language and also for its potential to provide critical, interpretative readings of poetic texts in dynamic, time-based literary forms that might also be understood as, themselves, aesthetic literary artifacts, "... making poems," as Penny put it, "embodying and exploring elements of translation and critique. I have called these inextrinsic because their energies direct the reader in and out at the same time." A link to a draft of Penny's latest paper on Inextrinsix (the nominal form of 'inextrinsic') is given below. 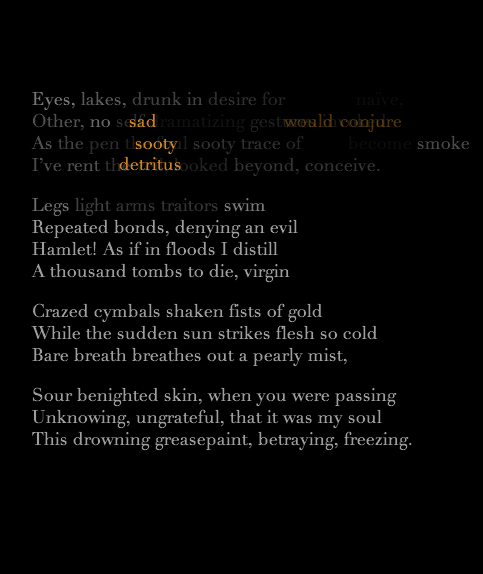 In late 2010 and a number of times since, preliminary outcomes from this collaborative research have been presented and/or installed. (See the listing below.) From a certain perspective, the underlying process is relatively simple: an algorithmic point of attention moves through a text and draws on a human-composed table or grammar of substitutions in order to provide interpretation/ translation/ commentary as it moves through the text, rather than in a temporally 'stunned' parallel or hypertextual relation (as is, in fact, more common in textual criticism, commentary, and conventional translation). But there are no established mechanisms or systems for this kind of reading and setting up a framework to develop one is not a trivial task. The Readers Project begins to provide such a framework and we have slowly reached a point where a simple web-based application can demonstrate certain potentialities for translation, and where programs as runnable Java .jar files may be downloaded to demo Penny's experiments with poetic critical reading and dynamic, collaborative translation or trans-lingual composition. These pieces cannot yet be configured by other readers, although the mechanisms for such configuration are in place. This page now provides links and download access to some of our experiments (entirely without technical support or warranty).

'Lu Shan Du Ye' by Xu Ning (fl. during Yuanhe 806-20), translated by an 'inextrinisic reader' whose substitutions were composed by John Cayley, 2013, with code improvements 2015, implemented in RiTa.js, and a partial Javascript version of The Readers Project framework.

The links below will allow you to download runnable .jar files encapsulating Java applications and associated resources. Double-clicking launches these applications although you will need a Java 'Runtime Environment' (JRE) installed, you may have to adjust Java security, and you may have to allow the running of applications from an 'unregistered developer' (myself).

Once running, the applications display the texts-to-be-read but you must use keyboard commands to start and, to some extent, control a (current) maximum of two readers. A guide to controlling the readers is provided here.

'Flights Unflown: Un coup de dés ... ' runnable Java .jar file, 2013, 2015. An opening from Mallarmé's poem with inextrinsic readings composed by Penny Florence for the performance, installation, and discussion in the Tate (see below).

Selected Presentations on the Inextrinsic Readers

With an author's-final draft linked here by permission ... ‘Inextrinsix: poetry in translation and multilingual, collaborative digital poems: a revolution-in-waiting’ was presented by Penny Florence at the 2015 Electronic Literature Organization conference, 5-8 Aug 2015, along with the latest version of the Java-implemented system, as used by examples above.