This work is part of a series investigating reading and subliteral differences stemming from Orthographics (2012- ) and my Subliteral Narratives (2019) collaboration with Joanna Howard. Letter pairs in certain fonts are distinguished by as little as a single stroke or part of a stroke, and some pairs of words containing these letters in the same position are, thus, also minimally distinguished. In this piece, only the pairs f/t and e/o are activated. Words transition continually and quasi-randomly, more or less at the limits of the reader's perception. The text may appear to be unchanging, but, within constraints, it is always saying something different. Other readings are evoked by way of subliteral difference.

deferred lest meaning ... was produced at the request of Friedrich Block for the exhibition 'POESIS: Language Art' at the Kunsttempel Gallery, Kassel, Germany, August 2–October 6, 2019, celebrating the 20th anniversary of the gallery and Block's p0es1s project. The web app version of this piece will be displayed on a Fire HD 10 tablet and may also be accessed (zoom out your browser to show the complete page) here.

I can offer this ambient poetic work pre-installed on a Fire tablet. Collectors are welcome to contact me and arrange the purchase of a suitably configured device.

The following text (slightly adapted for this context) was also commissioned for the exhibition catalogue:

After computation was made “personal,” accessible to individual makers, I soon realized that I had been called upon to make literary artifacts in programmable media. Given my background and inclinations, I made, specifically, poetic artifacts. For me, by contrast with many serious poets at the time, this engagement generated no existential challenge to poetic making. It did suggest, however, to myself and others, that there were a number of fundamental problems with “literature” and “the literary.” There is an irony here, in that the programmatological mediation of aesthetic language helped bring me to a place, in art and theory, that challenges the world of letters when letters – encoded transcriptions of chiefly documentary grapholects – are all that contemporary computation can address. Language as such still eludes computation. Regardless, I had learned that my medium was language itself. Computation was and is an obstacle between myself and language, proving and testing my desire for an art of language as such. Now, as of the 2010s, computation speaks and listens. It pretends language in vocal and aural humanoid embodiment while relying and insisting upon its formalist reductions. My practice-as-tragicomedy intensifies. And here's another irony, the language art of Poesis is expressed and catalogued as visual poetry, at the very moment when my work – and the culture of “reading” – is turning to aurality. There are letters and typographic words on the page image below but, in common with the graphic instantiations of all so-called literature, their visuality evocalizes. Here other readings are evoked by way of subliteral difference. You, dear reader, embody these ambiguities, meaning that you grasp them by – inner, no less corporeal – hearing. 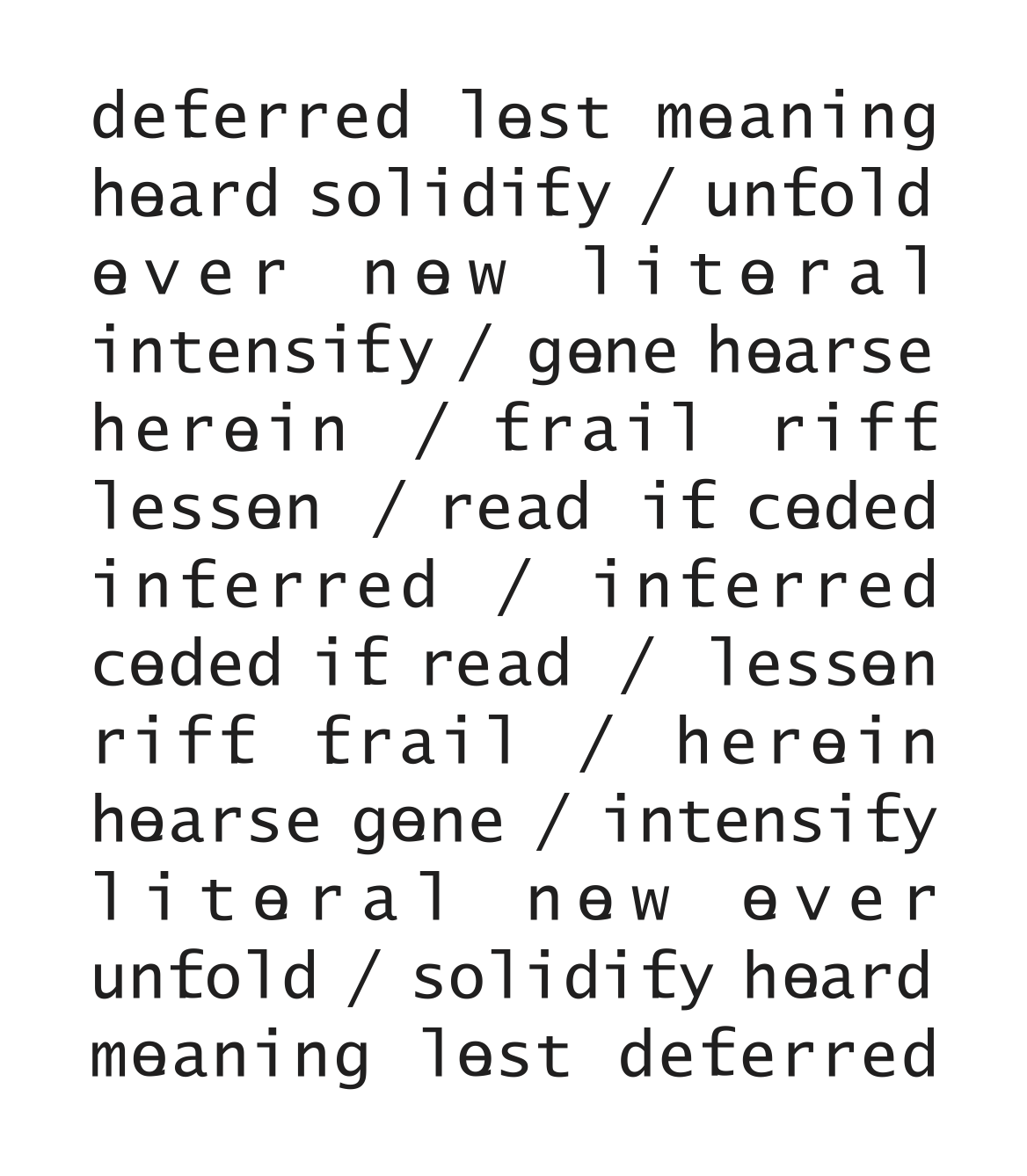 This version of the piece – the temporality of its variant readings 'stunned' by typographic simultaneity – was made with the help of the excellent Andrew Bourne, who designed bespoke glyphs for f+t and e+o, the only subliterally differing pairs that were allowed in this form.