The most recent manifestation of Monoclonal Microphone was the movie, presented for the Arts Program of 'The End(s) of Electronic Literature,' the 2015 conference and festival of the Electronic Literature Organization, University of Bergen, Norway, Aug 5-8. This movie — which shows edited screen capture of Monoclonal Microphone poems in the process of generation along with an extract of animated zooming in and out of reading distance for a pre-processed array of poems — may be viewed and/or downloaded here. (550 Mb) 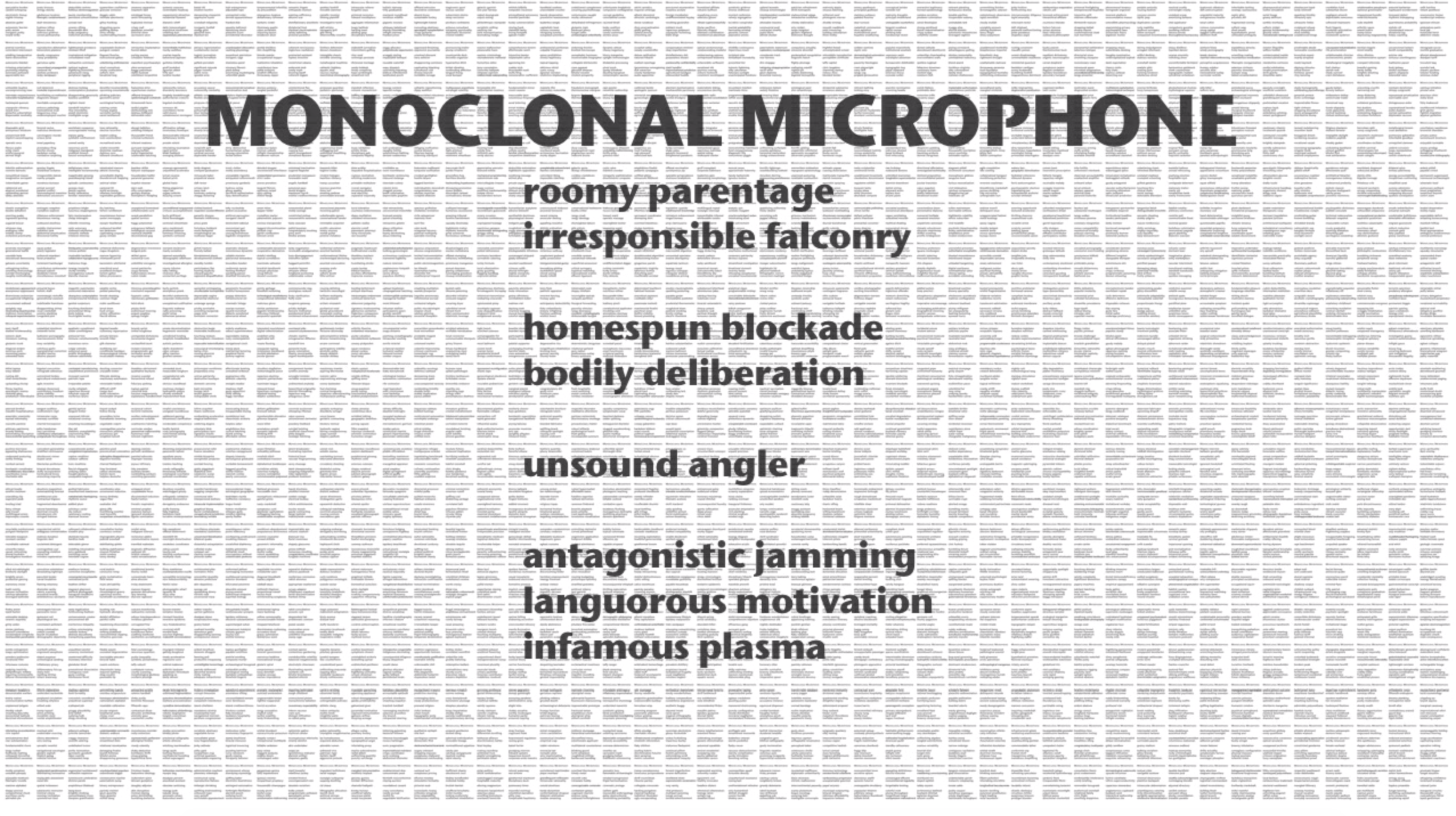 The poems are generated by algorithms that compose phrases and lines and then refer these elements of language - via network search services - to the implicit corpus of language-making currently indexed by Google Books. The most recent form of presentation for Monoclonal Microphone is a screen-formatted array containing over a thousand of the 'monoclonal' poems. A visual interface zooms into the array allowing randomly selected individual poems to be read. Before this animation was produced, a similar number of poems had been printed on a portrait format poster, 34x48 inches.

On this page you may link to two QuickTime-rendered movies that will give some impression of the work. The 480x270 pixel version is suitable for mobile devices. The larger 1280x720 movie is, in fact, a Quartz Composition wrapped in a QuickTime movie. This is linked-to directly. If you have an appropriate QuickTime plugin, it will run after downloading about 55 megabytes, but this cannot be guaranteed. This version of the piece provides genuine pseudo-random selection of individual poems. Visitors with modern OSX machines may also download the Quartz Composition itself and use it as a screen saver by placing it in one of their 'Library/Screen Savers' folders and configuring it in System Preferences.

The poems in these versions of the piece were generated in 2010 and 2011. A description of their generation is adapted, below, from an article by the author, 'Reading & Giving', in the journal Performance Research 18.5 (2013) 10-19. An open access, author accepted manuscript of this article is available here, in the Brown Digital Repository. 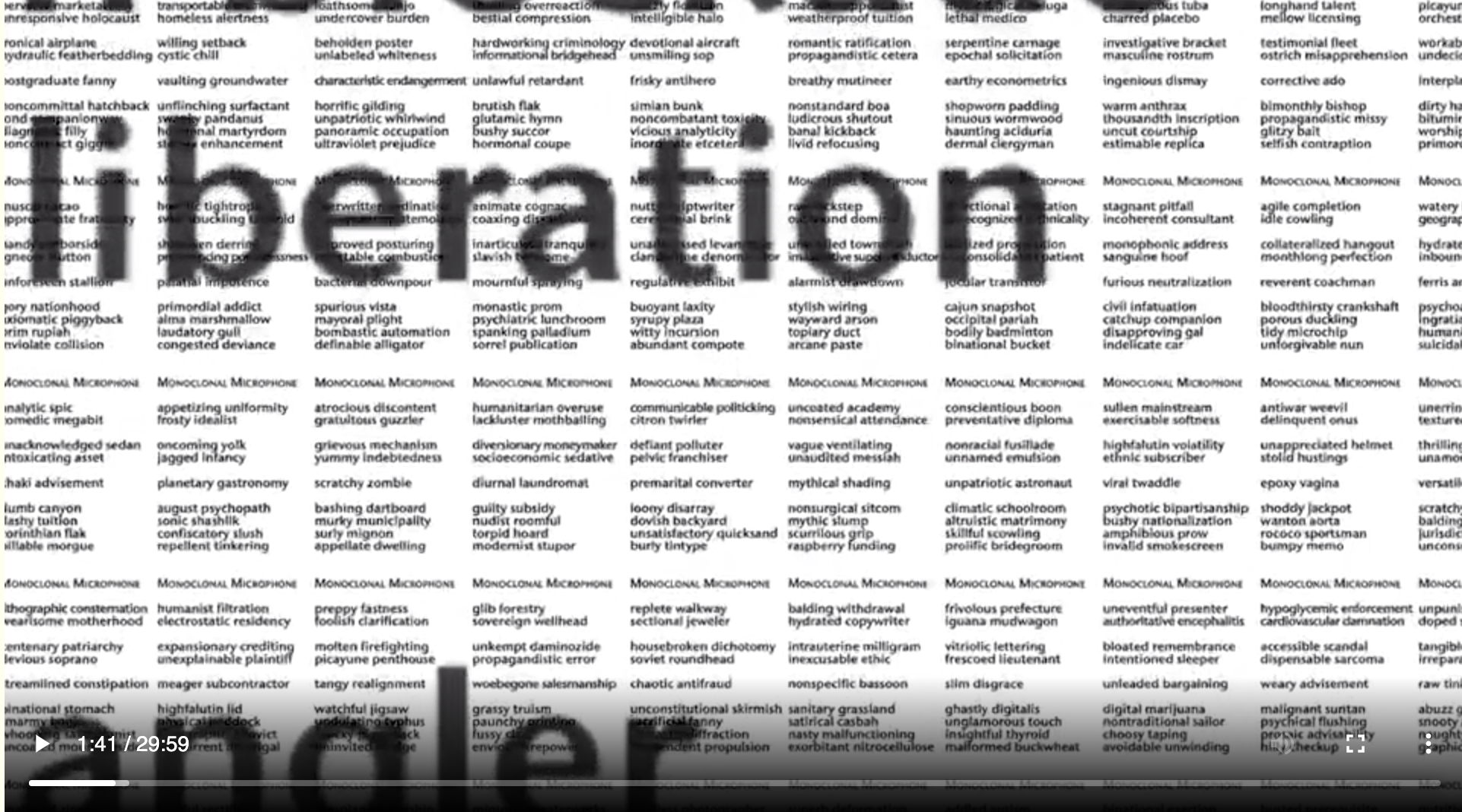 The above videos were captured from a Quartz Composition, programmed with Quartz Composer. Quartz and its APIs are graphics technologies at the core of the Apple Mac OS and iOS platforms. Apple allowed users coding access to these through QuickTime, but such support was dropped in the Mojave 10.14 version of OS X. Now the only feasible way to play them is under an earlier version of the OS, and using QuickTime Player 7, which is still downloadable (as of Summer 2020). This version of the player runs under Mojave but ceased to be supported after Catalina 10.15.

Monoclonal Microphone in this form was first displayed as part of an exhibition at the Counterpath gallery space in Denver Colorado, Nov 15-Dec 8, 2013: 'Writing to be Found - three screen-based projects'.

Monoclonal Microphone arose from a process designed to generate an initial text which subsequently served as the loose template for instances in the open-ended set of potential poems that constitute the work.

The ‘first’ text of ‘Monoclonal Microphone’ is the poem-like arrangement of title and nine lines of ‘verse’ illustrated in the large gray type of image below. The pseudo-code/constraints that generated this text are as follows. The poem is composed from a two-word title and two-word lines, each one an adjective preceding a singular noun, selected from a digitized lexicon by quasi-random processes. Another simple algorithm generated quasi-random couplet- or verse- divisions for the poem-like text based on the occurrence of particular letters in a line. Potential adjective-noun lines were also searched for in Google Books, double-quoted, to find a (relative frequency) count for the possible line as a word sequence. Only phrases with zero results (no hits) were selected. I call these word sequences ‘zero counts.’ At the time of searching they had not yet been indexed in the Google Books ‘corpus.’

The lefthand part of this image shows a printed poster with 1,020 subsequent texts, here in a minute typeface. As a function of my own further design, these ‘poems’ share more than the original generative constraints. I read and then read into the verses of the first ‘Monoclonal Microphone’ narrative and semantic arcs that can be encoded in a speculative, elided grammar thus: After roomy parentage / comes irresponsible falconry. // Homespun blockade reinforces / bodily deliberation. // Oh unsound angler — // an antagonistic jamming of / languorous motivation, / the infamous plasma of / closeted anatomy.

For the generation of the field of poems, the number of both lines and verses in the model were preserved and the literal composition of the lines also follow the rules of verse-break generation. Note, for example, that the letter ‘e’ does not occur in any of the poems’ lines 6 thru 8, for this reason. More significantly, collocated phrases including the above added grammar words have been searched in Google to ensure that they do occur in Google’s general corpus, with a count of 65 or greater. For example from the top-left-most poem in the righthand part of the image “after coincident” was searched, as was “generalship comes” and “comes stratified”. When actually reading (assuming this were graphically possible) any of the poems printed on the lefthand side, one should always be able to add in these same words from this model - after, comes, reinforces, oh, a/an, of, the, of - and discover a more determinate reading, one that is sometimes uncannily appropriate given the relatively arbitrary and indeterminate processes that have otherwise given rise to these texts.

As here reproduced, on the lefthand side of the image, the 1020 texts underlying their initial seed and template text cannot be read by humans. However their virtual linguistic artifactuality is accurately represented by graphic traces and I have, above, provided an exposition of the generative principles - alluding in this case to actual code - that determine the disposition of the graphic marks. On the righthand side, a part of the same image has been scaled up such that actual human reading of six instances of the text becomes possible. I have read these poems; you may read them now. My question is to ask: Is this enough? The six poems that you and I have now read certainly exist. What about the rest that have not yet be ‘scaled up’ for you?

There are a number of continuous ‘scales’ of readability that we might apply to our experiences of the these texts and the virtual possibility of our bringing them into actual language as we do so. The most obvious and material of these is literal graphic scale. I scaled the lefthand side of the image in order to make six instances of the texts (barely) readable and, arbitrarily, so that they fitted neatly beside the overall image of one plus 1,020 (unreadable) texts. Using the movies supplied or with access to the pdf version of the printed poster it is possible to zoom in continuously on one or other text. For particular readers the texts will have entered human readability at very different points during this zoom. However the strange and singular moment at which the text becomes readable will always have what I call a ‘catastrophic’ quality for human readers, demonstrating the sudden diegetic break when a constructed artifactuality - up until this moment ambiguously an artifactuality of, in this case, visual or linguistic material - suddenly and unambiguously enters the world of language.