This Is (Not) Writing

A transformation of Magritte's famous image for immersive 3D. This maquette was produced, in part, as an illustration for Cayley's paper 'The Gravity of the Leaf' in which it is described in the form of a thought experiment. 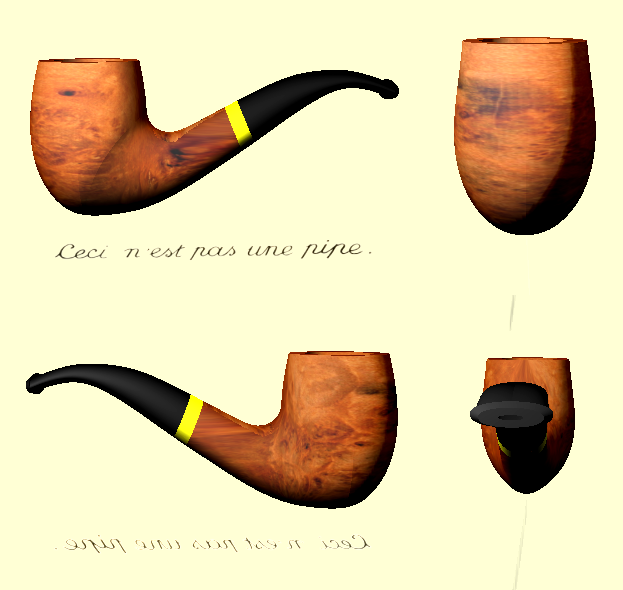 What happens if we translate the objects in the painting to the Cave? Arguably this is not a remediation. The pipe and its 'caption' are already in the very no space that the Cave simply actualizes as an immersive illusion. But follow me in this thought experiment. We are standing within the Cave, its four projective surfaces in front, to the left and right, and beneath our point of view. The no-color of The Treachery's background has been projected on to these surfaces and we ignore or no longer see those places where the walls meet. The walls have disappeared for us and we are in, or rather, immersively before the surface of Magritte's painting. The pipe and the inscription fade into view before our eyes, seemingly at the same distance from us as they would appear to be if we were comfortably viewing the painting in a gallery, although we see no frame. (The 'frame' is beyond our field of vision, around the edges of the device, which we are inside.) Both objects — the pipe, the inscription — look more or less exactly as they would in the painting. The pipe hangs in space. We sense intuitively that this can happen as a function of this media-constituted world. There's no gravity for image-objects here. However the inscription is still 'placed' in a more radically ambiguous manner. It must be on a surface, mustn't it? Is it inscribed on the background that surrounds us? If so, how could that be? How could a surface surround us? Can the 'leaf' have that property?
Well manifestly, as it turns out, the inscription is not on the leaf or any surface, at least in that sense. We see this because the objects are moving, both of them together, and in the same manner. They are slowly rotating around a vertical, 'Y,' axis that appears to run through the visual centre of both pipe and inscription, between the 'p' and the 'a' of the word 'pas' let's say. The pipe rotates and we continue to see a pipe, a pipe suspended in space and rotating slowly. But the inscription? Apparently it has no thickness. We can still see what it is and, for the moment, we can still read it, but the effects of perspective — foreshortening and the subsequent distortion of the letter shapes — are making the letters and words look more and more unfamiliar and harder and harder to read until, suddenly, they're unreadable, merely a highly distorted representation of writing. Once the objects have rotated ninety degrees in relation to our point of view, they stop and, at this point, the inscription is 'edge on.' It's still 'there' but it's not only unreadable, it's invisible.

Cayley, John. 'The Gravity of the Leaf: Phenomenologies of Inscription in Media-Constituted Diegetic Worlds.' in Beyond the Screen. Eds. Peter Gendolla and Jörgen Schäfer. Bielefeld: Transcript, 2010, pp. 199-226.

John Cayley and Clement Valla made this study for the Brown University Cave Writing software which, as of 2017, is being updated to Blender-based Writing3D software. The maquette displays inactively as an immersive VR project in Brown's legacy Cave and also in the Yurt (Yurt Ultimate Reality Theater) that has replaced it.

The project targeting the Cave Writing platform can be downloaded from this link, and information about how to download software to run it locally, without support or warranty, can be found at http://writing3d.xyz.

The following is a screen-captured movie of the pipe doing one rotation in Cave Writing's Desktop Previewer:

The pipe model is by Clement Valla.